A world premiere, originally seen as a part of The New Wolsey’s Pulse Festival, Latitude Festival and a small Scale tour The Little Blue Boat and the Secret of the Broads is an exciting new play fo 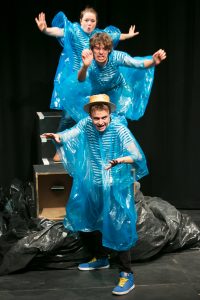 “Teddy knew he had to make sure the police could find Pincher Pete, so he did what he’d never done before and, he bit right through Pincher Pete’s Shabby old trousers and sank his teeth into the horrible thief’s bum!”

Phil Johnson’s locally set story ‘The Little Blue Boat and the Secret of the Broads!’ The tale sees Able Sea Bear charter his way through the Norfolk Broads making friends and having an adventure on the way to find his owner’s Grandchildren.

These performances were accompanied with 10 free drama workshops for children from all back grounds to engage in and learn more about acting, signing, describing and working with disabilities.

Read a review from the show here

The Production was kindly supported by